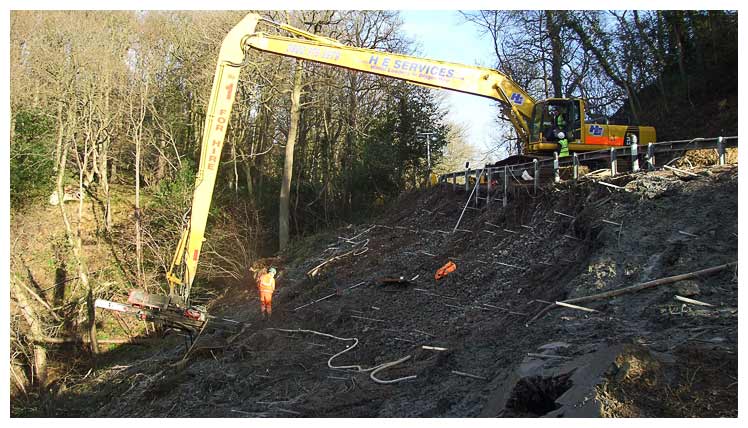 Moorsholm Lane/Liverton Mill Bank is a narrow, adopted highway which links the hamlets of Moorsholm and Liverton between Guisborough and Whitby. The road is on an incline and sits between a steep downslope with a beck at the toe on the North side and a significantly steeper upslope on the South side. In 2008 a landslip occurred on the downslope directly beneath the carriageway.

A site investigation report showed that failure to the steep bank [35deg] happened following a period of very heavy rain and was likely caused by blocked drainage along the road resulting in water cascading down on to the slope and infiltrating the already saturated ground. Previous slips were evident on adjacent ground, and a series of shallower slips within the main landslip were also present on the site. Some very steep tension cracks and hummocky ground were also evident.

The chosen design solution was the installation of an extensive array of high yield-strength soil nails in combination with geotextile erosion protection matting, placed over an area of some 240sqm. The area to be drilled/stabilised was 450sqm, requiring 203 soil nails which varyied in length from 6.0 to 13.0m. The soil nails used were Ischebeck-Titan, high yield-strength steel R32/20 tendons, galvanised on the upper length.

To prevent a recurrence of the water ingress problems which caused the slip, the highway drainage system was reinstated and upgraded by Redcar & Cleveland Council.

Concrete repairs and the application of protective systems to address concrete damage caused by aggressive chemicals to an Alum storage tank.