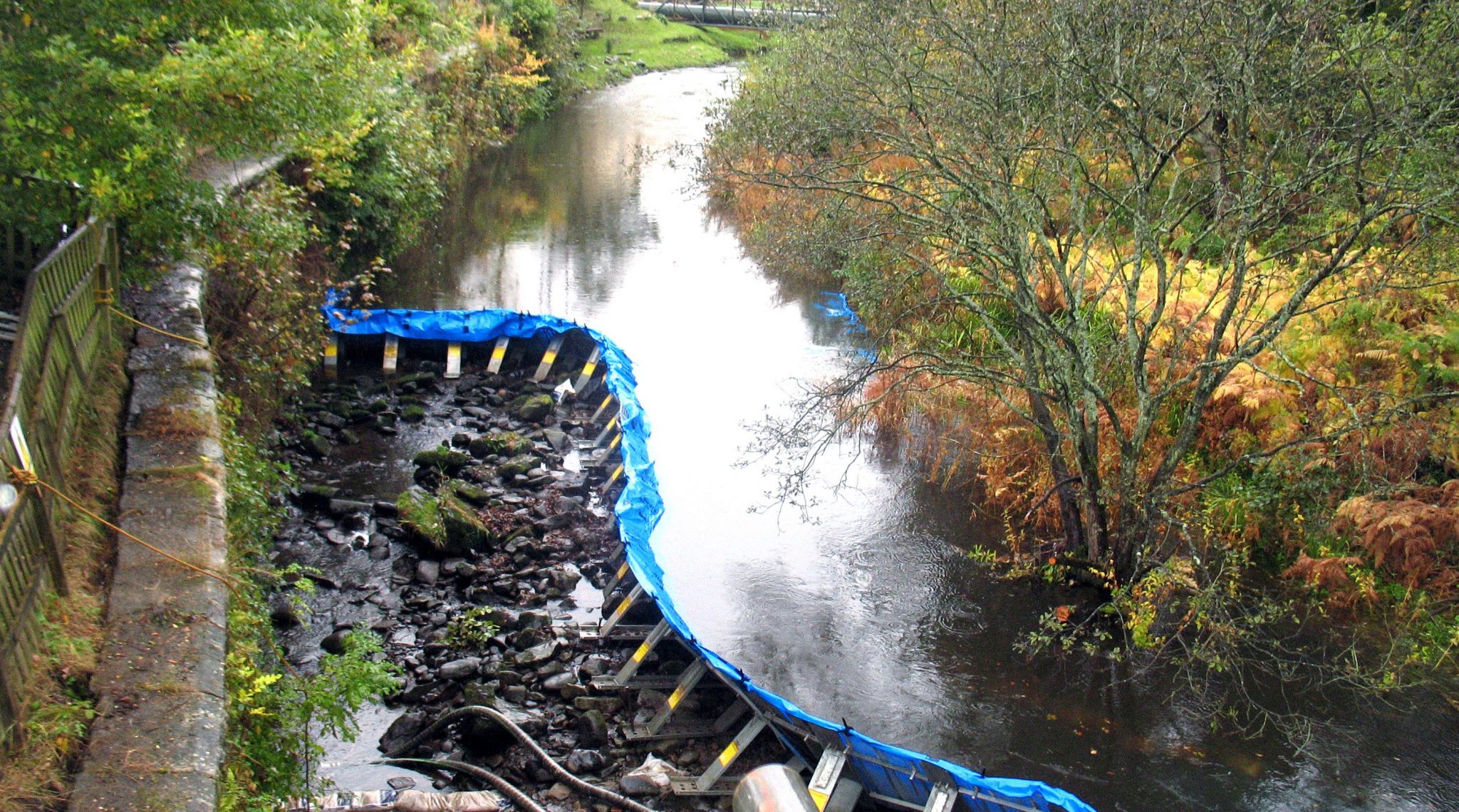 The historic town of Shotley Bridge, situated on the River Derwent, was the site of one of St Astier’s most ambitious projects to date. A house looking over a section of the 66-mile long river had begun to succumb to subsidence due to the current of the water. Located on Oley Meadows, named after the legendary swordmakers who settled in Shotley Bridge in the 17th century, the property was in serious need of action to prevent further slippage of the retaining wall that kept the property out of the river. 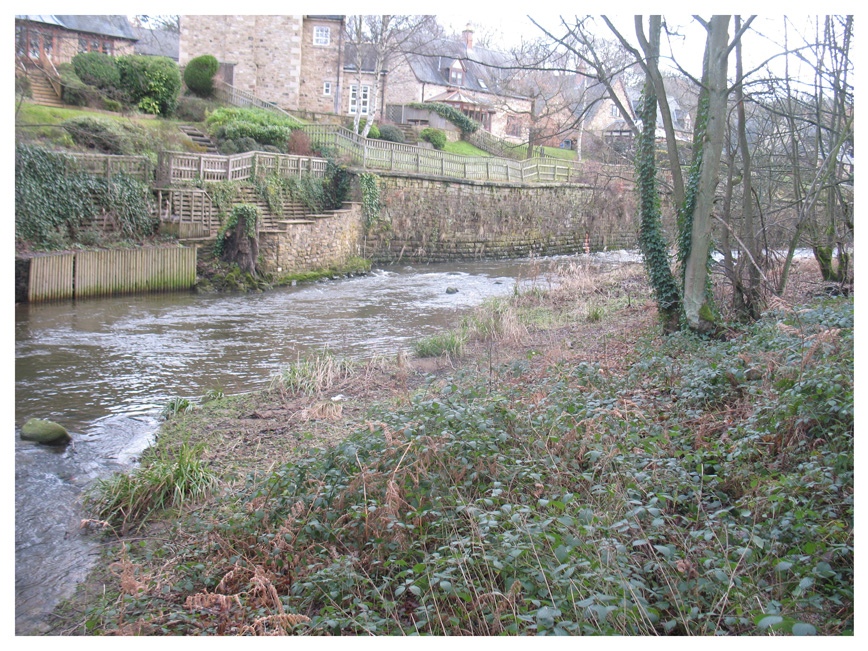 In order to stabilise the wall, the Structural Engineer designed underpinning to a 5M length of wall, extending 1M under the wall and to a depth of 2M. The toe to the underpinning extended 1.5M from the wall and into the course of the river.

Due to the location of the site, all access was via the garden to the domestic dwelling and mechanical hoists were installed to transfer the heavy pumping equipment into the river.

To support the wall during each stage of the excavation and underpinning, a fully designed propping system was erected as a temporary measure and a 12M³ reinforced concrete thrust block was cast into the riverbed to support the propping. 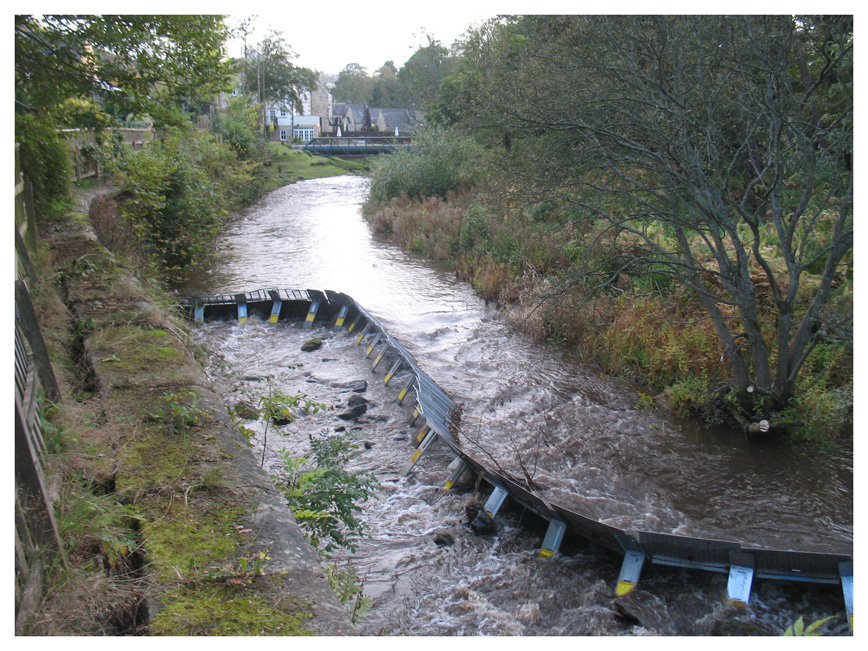 Prior to works commencing proposals had to be forwarded to the Environment Agency to obtain a license to carry out the works. This included a detailed method statement to deal with protection of the fish-stocks, wildlife and the surrounding environment by setting up a sediment filter, cofferdam and pollution control measures.

Continual liaison with Northumbrian Water and the Environment Agency was essential in planning the works around the routine maintenance at the nearby Derwent Reservoir and the monitoring of inter-connecting river levels. 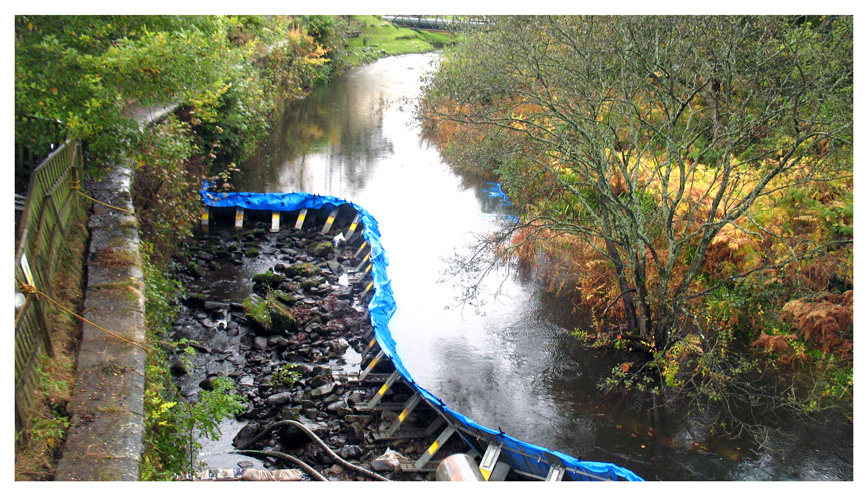 Once the pumps were fully operational the 80M long site was de-watered within 2 hours.

The river bed was found to be permeable and continual water ingress had to be controlled. Sand-bags were used to create dams within the cofferdam to contain the spring water and to maintain maximum pumping capacity. 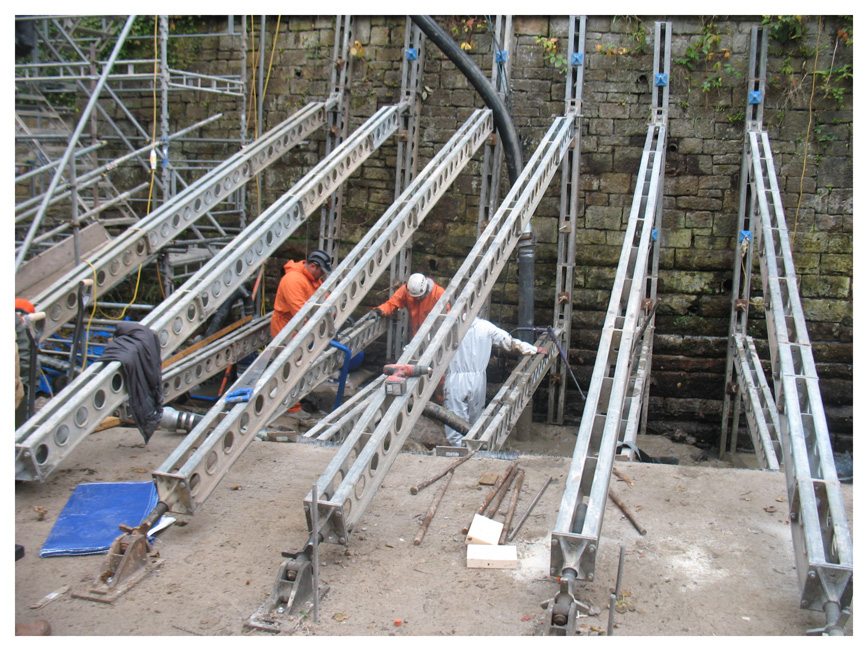 To enable the temporary thrust block to be formed, the riverbed was excavated to a depth of 1M, extending 6M long and 2M wide. Due to the logistics and risk of diesel contamination from excavators, this was removed by hand.

The excavation was shuttered and the concrete was pumped into place.

A specialist propping installer was used to erect the fully designed shoring system, comprising 6 RMD Slimshore props, fixed into the retaining wall and anchored back to the thrust block. 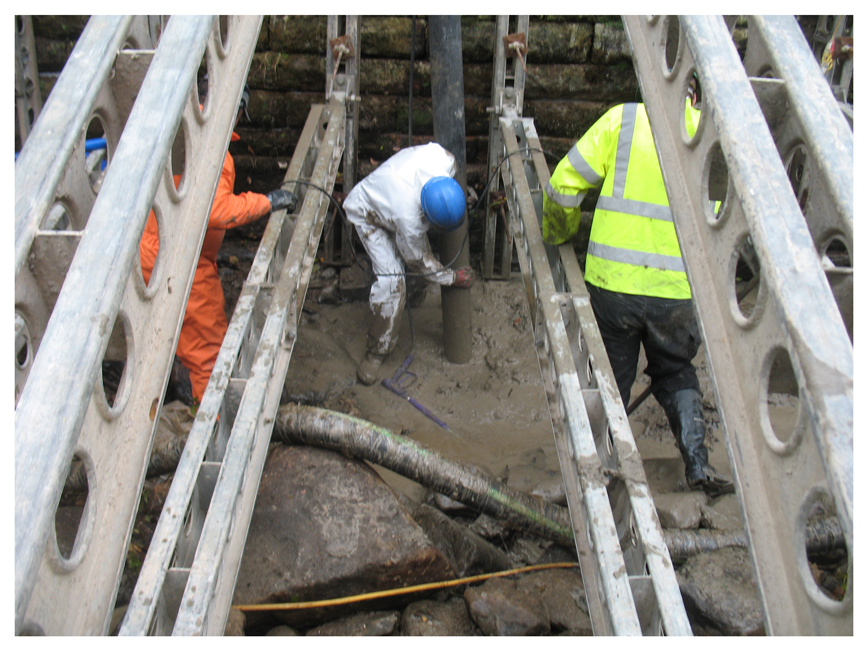 This process was greatly hampered, however, by the concentration of river boulders, suspended in the clay. The boulders had to be removed by hand which meant that operatives were working inside the excavation and propping and shuttering was progressively extended and the excavation increased in size.

The pumping operation was carefully managed at this stage, extending to 24 hour cover to ensure that the void was not flooded, avoiding further de-stabilisation of the wall. 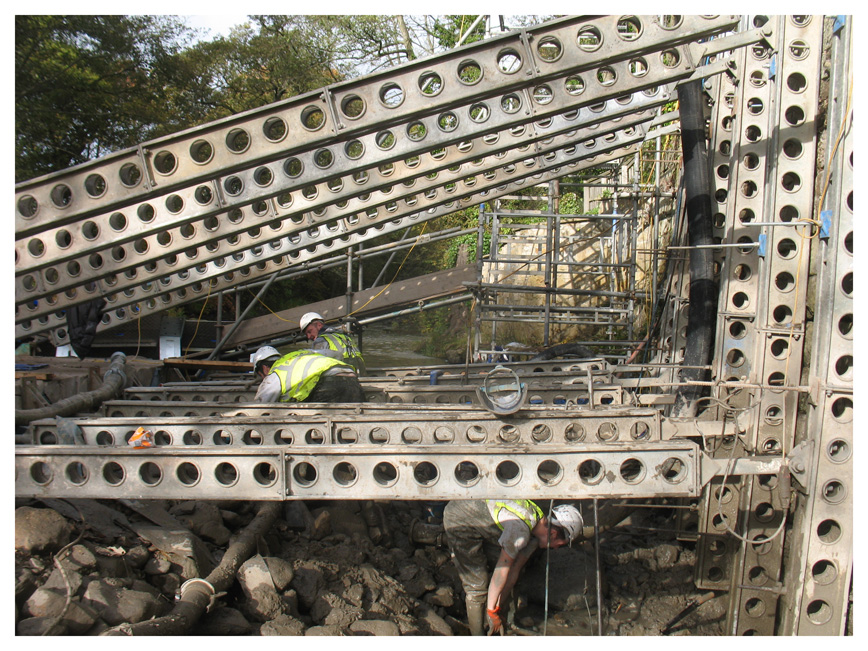 The glacial clay was removed using a combination of hydro-demolition and a vacuum extraction machine. Teams of operatives worked together to loosen the clay and to extract it into a tanker.

The clay was transported to a nearby licenced treatment facility and disposed of safely. 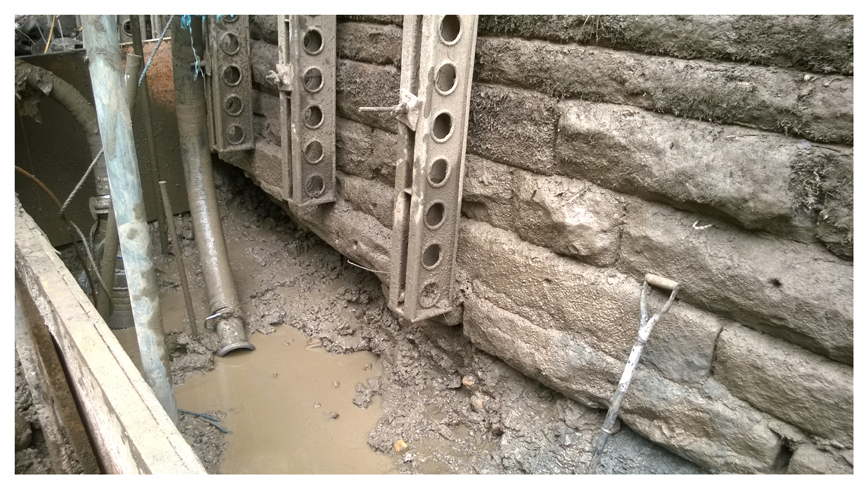 As the excavation increased in size, the void beneath the retaining wall was exposed and propping to the wall was introduced. Continuous Helifix bars were grouted into the low level bed joints to increase the support to the wall, enabling the safe extraction from directly beneath the wall. 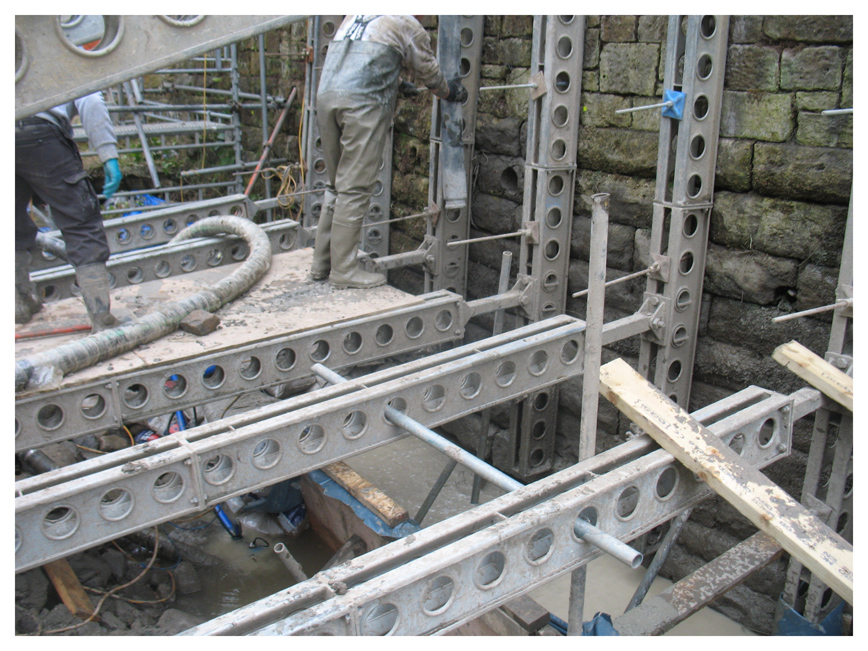 The shuttering was made water-tight to prevent contamination of the water course by the concreting operation. The concrete was pumped into the void using a specifically designed water-tight concrete which has a greater resistance to abrasion and water absorption. 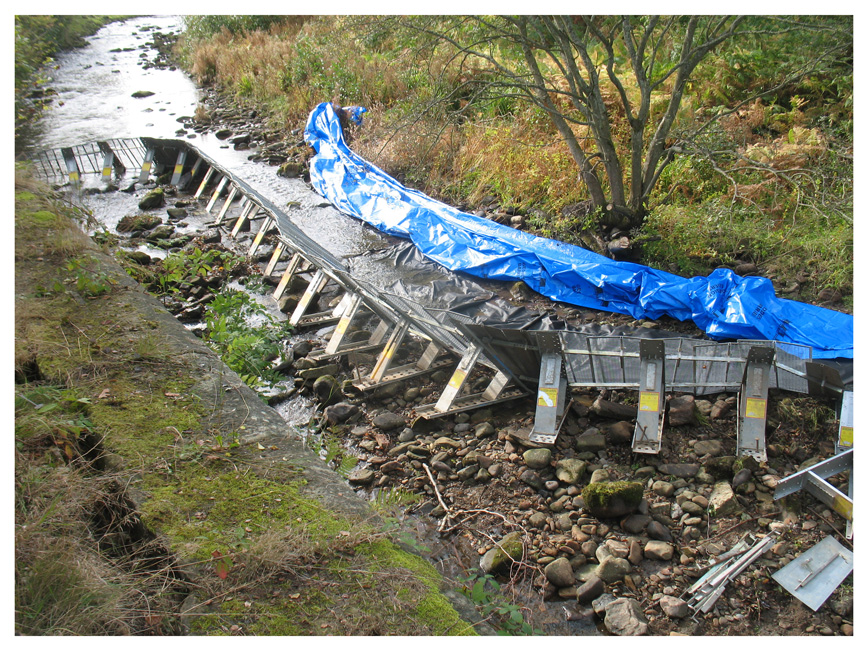 Upon completion of the concreting, the temporary shoring was stripped out and the reinforced concrete thrust block was broken out and removed.

The river was returned to normal and the site was fully cleared within 5 weeks of starting.