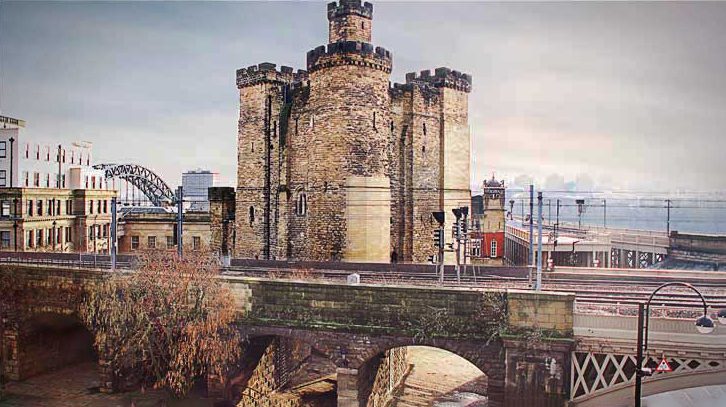 With the final dismantlement of the scaffolding in early December, phase three works to Newcastle’s famous Castle Keep are now fully complete. The 12th Century Castle Keep is one of the finest examples of a Norman Keep in the North of England and stands on a steep sided promontory overlooking the River Tyne.

Over the centuries, its sandstone walls have suffered the ravages of wind, rain, ice and snow. In more recent times, smoke pollution from the heavy industries that made Newcastle the power-house of the North-East, has resulted in deep carbon staining [soot], making the ancient monument even darker and more brooding in appearance.

On the Eastern elevations which are open to the salt-laden winds blowing from the nearby North Sea, surface decay of the stone blocks was found to be particularly severe with up to 1/2 an inch thickness of loose, shaley material evident over large areas. In other parts, pieces of stone up to 3 inches in diameter could have fallen away without warning.

The conservation project was carried out over a 14 week period and required Scheduled Monument Consent from the Department of Culture, Media and Sport. Work comprised a painstaking process of de-shaling, [the physical removal of the outer skin of loose stone], re-pointing and, where necessary, replacement of some of the 800 year-old sandstone blocks, which form the outer walls and architectural features of this ancient monument. 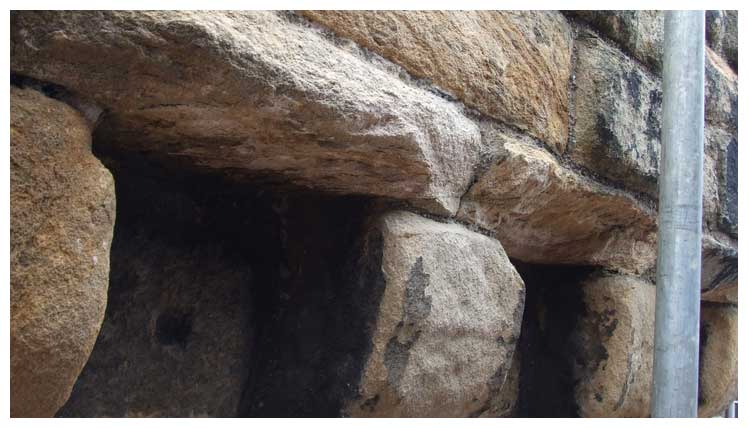 De-shaling works remove loose or friable stone which was in danger of falling away from the structure.

One of the main challenges facing the conservation team before any work could start was access to the castle walls. The main East Coast Rail line runs at the foot of the North/West elevation and a complex web of scaffolding over-hanging the line had to be installed.

Health and Safety requirements prevented installation over the “live” line and Network Rail were only able to allow possession for short periods at night time. Consequently, the scaffolding was erected over a 12 week period with work taking place between the hours of midnight Saturday and 7.00 am Sunday.

With such a complex structure, St Astier had to work very closely with Network Rail, English Heritage and all the other parties to make sure the scaffolding did not damage the castle walls or disrupt the rail line beneath. To speed the process along, Scheduled Monument Consent was agreed at an early stage and engineering design was independently checked by structural engineers.

An arched hood moulding above the window set, originally designed to shed rainwater from the window, required particular attention. The severely weathered stone was cut away back to sound material rather than complete block removal and replacement. New stones were then fixed using stainless steel dowels and epoxy mortar with bed thickness and line honoured wherever possible. Natural hydraulic lime mortars were used to maintain the integrity of the construction. 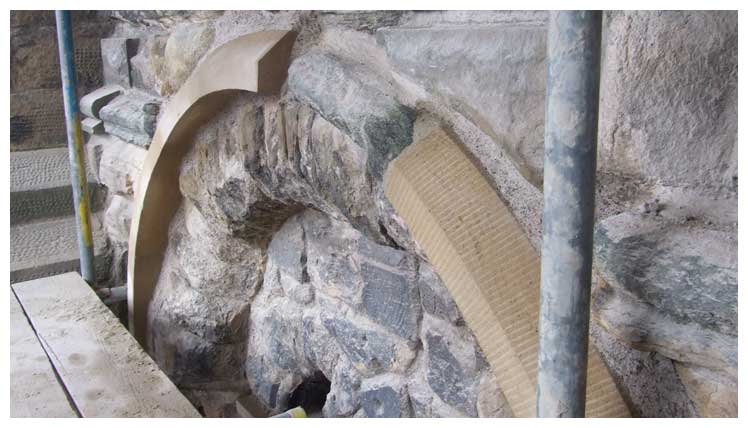 New arch mouldings which will aid in water dispersal

A particular challenge facing the team was the replacement of severely corroded stone detailing around a two-light window feature to the Keep’s north elevation. Here, the stone capitals’ surmounting columnar jambs had decayed so badly that there was no indication left of the original moulding detail which the St Astier Masons could use for visual reference.

The original columns and capitals did not conform to any of the more usual classical styles of architecture such as Doric, Ionic or Corinthian; so we could not use these details for guidance. With so little to go on, new designs for the capitals had to be created which we believe reflect the original style and give an appropriate period feel to the Keep. 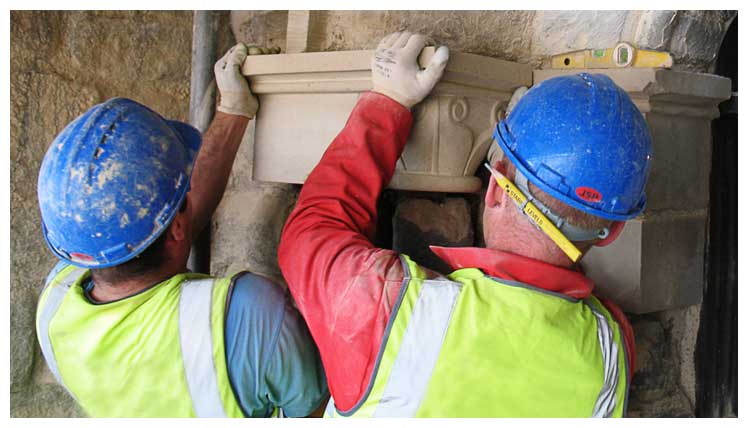 A newly carved capital is lifted into position

With this third phase of works now complete, the sight of Newcastle’s famous Castle Keep shrouded in scaffolding, should not be seen again for some 30 to 40 years.